A griot from the Mandingue culture of West Africa, Arouna Diarra is an accomplished n’goni & balafon player. Performing a tradition of folk songs reflecting topics from war to love for one another, Arouna sings with spirit, nostalgia, and great joy, in his native language, Bambara.

Arouna was born in Bobo-Dioulasso, Burkina Faso, a major hub of cultural & artistic significance in West Africa. Diarra is a family name associated with the griot. In West African culture, griots are curators of the arts and of history. Their families, like Arouna’s, are composed of musicians, poets, and storytellers. Arouna was destined to bring traditional music into the modern-day, further developing it while remaining true to it’s roots.

Performing styles such as Wassalou, Arouna brings a dynamic repertoire to the table, full of timing changes and improvisational prowess. He plays the kamel n’goni – a 14-string harp-like instrument – with a melodic and percussive sensibility. In fact, Arouna makes his instruments himself, both for performing and for teaching his students.

Before making his home in Asheville, North Carolina, Arouna was a key member of internationally-touring group, Lanaya. He is a founding member of NC-based, West African folk music ensemble, Mandé Foly. He has since been touring across the United States with Rising Appalachia, spreading that undeniable West African rhythm and joy. 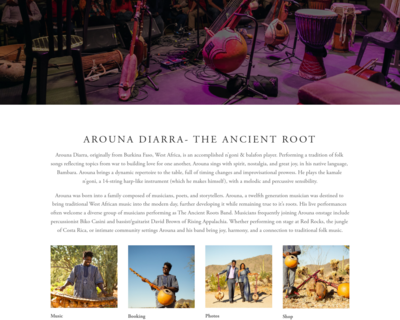