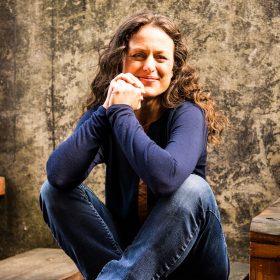 Beth Wood is a modern-day troubadour, poet, and believer in the power of word and song. Beth has been writing, performing, recording, and teaching full-time for twenty-four years — delighting and inspiring audiences with her exceptional musicianship, intelligent writing, powerhouse voice, and warm and commanding stage presence. Texan-raised and Oregon-based, Wood has morphed from a young classically trained, folk-tinged singer-songwriter to a wailing southern rock band leader to a college-circuit acoustic coffeehouse sweetheart to a well-respected nationally touring poet and troubadour. Through all of these incarnations, Wood has remained true to herself and to her artistry; she has done it her way.

A home-body with an ever-present wanderlust, an introvert with a passion for performing, a creative free-spirit with enough discipline to rework her dream year after year, Beth’s work has expanded to include teaching and song coaching as well as leading and facilitating workshops, classes, and retreats. In addition to her eleven solo albums, one duo album, and one collaboration live album, Beth has released three books of poetry, Kazoo Symphonies, Ladder To The Light (2019 finalist for the Oregon Book Award Stafford/Hall award for poetry and 2019 Winner of the Oregon Book Award Readers’ Choice Award), and Believe The Bird (Winner of the 2021 San Francisco Book Festival Poetry Award), a collection of forthright, shimmering poems that examine the stories we tell ourselves. Beth also released Facepalm, a whimsical collection of stories recounting some of the most awkward conversations she has experienced on the road.

Beth grew up in the musically rich town of Lubbock, TX with her mom’s classical tapes playing in the car, her dad’s Willie Nelson records spinning in the living room, her brother’s Foreigner and Heart 8-track tapes blasting in his room, and her own little radio which she would hide under the covers and search late into the night for songs with women’s voices. Anne Murray’s “Songbird” broke something open in her that Bette Midler’s “The Rose” quickly filled up with tears while Karen Carpenter’s “Top of the World” and Captain and Tenille’s “Muskrat Love” delighted her to no end. Add to that mix Stevie Nicks and Christine McVie, Aretha Franklin, Bonnie Raitt and Rickie Lee Jones, and Beth Wood’s unique sound starts to emerge.

There have been awards. Beth’s skills in the craft of songwriting and poetry have been recognized by the prestigious Kerrville New Folk Award, The Sisters Folk Festival Dave Carter Memorial Songwriting Award, the Billboard World Song Contest, The Oregon Book Awards, and many more. There have been incredible and surreal moments in the spotlight: opening for Steve Winwood, Michael McDonald, Shawn Colvin, Sam Bush, Chris Whitley; being a four-time featured artist on Cayamo, a week-long Caribbean songwriters’ cruise along with most of her living musical heroes; singing the national anthem for 42,000 people at a major league baseball game; discussing guitar tunings with David Crosby backstage at a festival; being featured on “Troubadour, TX”, a nationally syndicated documentary-style singer-songwriter reality television series airing in almost 40 million households and 140 U.S. markets.

Beth is the director of Sisters Songworks, a series of intimate writing retreats in collaboration with the Sisters Folk Festival. During the challenging year of 2020, she co-founded She’s Speaking along with friends and fellow Oregon singer-songwriters Bre Gregg and Kristen Grainger She’s Speaking, a collective that creates forums/spaces for women’s voices and women’s stories to be heard, launched a YouTube channel showcasing over 50 original songs a by women artists about inspirational women. Beth also created a livestream concert series called Joyful Measures and a vibrant and growing community of supporters on Patreon, a membership platform that makes it easy to give direct support to your favorite artists.

Beth says, “It is my dream to make art, live simply, and be of service to my community and to the world. To move something with my art, whether it’s a swirling emotion or a curious mind or tapping feet, is the most glorious feeling, and I can never get enough.” It’s what keeps the songs coming and the words turning. It’s what keeps her dreaming in music at night.

Beth lives in Sisters, Oregon and is continuously writing and rewriting her artist’s manifesto while dreaming of adopting a dog. Beth believes that creativity is its own reward, and her musical philosophy is that there are no wrong notes.

OUR TURNING YEAR written and performed by Beth Wood 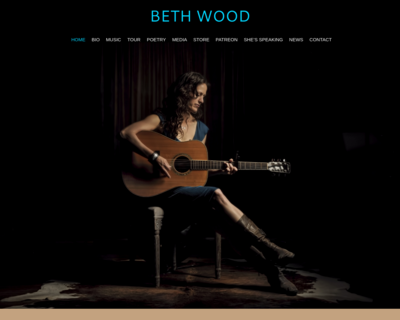