Few recording artists are as creative and prolific as Bruce Cockburn. Since his self-titled debut in 1970, the Canadian singer-songwriter has issued a steady stream of acclaimed albums every couple of years. But that output suddenly ran dry in 2011 following the release of Small Source of Comfort. There were good reasons for the drought. For one thing, Cockburn became a father again with the birth of his daughter Iona. Then there was the publication of his 2014 memoir Rumours of Glory.

“I didn’t write any songs until after the book was published because all my creative energy had gone into three years of writing it,” Cockburn explains, from his home in San Francisco. “There was simply nothing left to write songs with. As soon as the book was put to bed, I started asking myself whether I was ever going to be a songwriter again.”

Such doubt was new to the man who’s rarely been at a loss for words as he’s distilled political views, spiritual revelations and personal experiences into some of popular music’s most compelling songs. What spurred Cockburn back into songwriting was an invitation to contribute a song to a documentary film about the late, seminal Canadian poet Al Purdy and he was off to the races.

Bone On Bone , Cockburn’s 33rd album, arrives with 11 new songs, including “3 Al Purdys,” a brilliant, six-minute epic that pays tribute to Purdy’s poetry. Cockburn explains its genesis: “I went out and got Purdy’s collected works, which is an incredible book. Then I had this vision of a homeless guy who is obsessed with Purdy’s poetry, and he’s ranting it on the street. The song is written in the voice of that character. The chorus goes, ‘I’ll give you three Al Purdys for a twenty dollar bill.’ Here’s this grey-haired dude, coat tails flapping in the wind, being mistaken for the sort of addled ranters you run into on the street—except he’s not really ranting, he’s reciting Al Purdy. The spoken word parts of the track are excerpts from

Purdy’s poems. After that, once the ice was broken, the songs just started coming.”

Cockburn’s rugged fingerpicking style on the Dobro perfectly matches Purdy’s plainspoken words and the grizzled voice of his street character. A similar guitar style can be heard on two of the next songs Cockburn wrote, the gospel-like “Jesus Train,” and “Café Society,” a bluesy number about people who gather at his local coffee shop to sip their java and talk about the state of the world.

There’s a prevalent urgency and anxious tone to much of the album, which Cockburn attributes to living in America during the Trump era. But, more than anything, Bone on Bone amounts to the deepest expression of Cockburn’s spiritual concerns to date. The 12-time Juno winner and Canadian Music Hall of Fame inductee turned away from traditional Christianity in the mid-1970s toward a quest for the more all-inclusive mysticism he documents in his memoir. And it’s that kind of spirituality that figures prominently in “Jesus Train” and “Twelve Gates to the City.” In “Looking and Waiting,” Cockburn sings of “scanning the skies for a beacon” from the divine.

“It’s a song of faith and frustration,” says Cockburn of the latter. “…Tired of looking in from the outside. My MO has always been to be aware of the divine…that dimension…always dealing with being stuck in a kind of observer’s position with respect to all that. I know it’s there. I don’t really see as faith so much as knowledge. Others may have different ideas about those things, but for me, I don’t have to struggle to believe in God, or the notion that God cares what happens to me. But I do have to struggle with being in a conscious, intentional relationship. That underlies a lot of these songs.”

“Forty Years in the Wilderness” ranks alongside “Pacing the Cage” or “All the Diamonds” as one of Cockburn’s most starkly beautiful folk songs.

“There have been so many times in my life when an invitation has come from somewhere…the cosmos…the divine…to step out of the familiar into something new. I’ve found it’s best to listen for, and follow these promptings. The song is really about that. You can stay with what you know or you can pack your bag and go where you’re called, even if it seems weird…even if you can’t see why or where you’ll end up.”

“Forty Years in the Wilderness” is one of several songs that feature a number of singers from the church Cockburn frequents, for the sake of convenience referred to in the album credits as the San Francisco Lighthouse “Chorus.” “The music was one of the enticements that drew me to SF Lighthouse. As I found myself becoming one of the regulars there, and got to know the people, I felt that I really wanted all these great singers, who were now becoming friends, to be on the album. They were kind enough to say yes!” Among other songs, they contribute call-and-response vocals to the stirring “Stab at Matter.” Other guests on the album include singer-songwriters Ruby Amanfu, Mary Gauthier, and Brandon Robert Young, along with bassist Roberto Occhipinti, and Julie Wolf, who plays accordion on “3 Al Purdys” and sings with the folks from Lighthouse, together with LA songwriter Tamara Silvera.

Produced by Colin Linden, Cockburn’s longtime collaborator, the album is built around the musicianship of Cockburn on guitar and the core accompaniment of bassist John Dymond and drummer Gary Craig. Also very much part of the sound is the accordion playing of Cockburn’s nephew John Aaron Cockburn and the solos of noted fluegelhorn player Ron Miles (check out his stunning work on the cascading “Mon Chemin,” for example).

Two other songs should be noted. The environmental warning “False River” came about at the invitation of Yvonne Bloomer, the poet laureate of Victoria, British Columbia. Bloomer was seeking a poem about the controversial Kinder Morgan Trans Mountain Pipeline. “Pipelines have their own perils that we’re all aware of,” says Cockburn, “so I started writing what was meant to be a spoken-word piece with a rhythm to it. But it evolved very quickly into a song.”

“States I’m In,” which opens the album, conjures up feelings of mystery and dread. “It’s literally a ‘dark night of the soul’ kind of song,” Cockburn explains, “as it starts with sunset and ends with dawn. It passes through the night. The song is about illusion and self-delusion, looking at the tricks you play on yourself.” He adds: “Maybe it’s also a play on words about me living in the States.”

Cockburn, who won the inaugural People’s Voice Award at the Folk Alliance International conference in February and will be inducted into the Canadian Songwriters Hall of Fame in September, continues to find inspiration in the world around him and channel those ideas into songs. “My job is to try and trap the spirits of things in the scratches of pen on paper and the pulling of notes out of metal,” he once noted. More than forty years after embarking on his singer-songwriting career, Cockburn keeps kicking at the darkness so that it might bleed daylight.

Bruce Cockburn - Put It In Your Heart

Cockburn has not mellowed in those years. He is still producing his brand of folk/protest music. The songs may be a bit more personal these days, but from the opening track, “States I’m In” until the last track, “Twelve Gates To The City”, Cockburn is seriously angry about a lot of things, but this is balanced with his invitation to love.
—Aaron Badgley, Spill Magazine 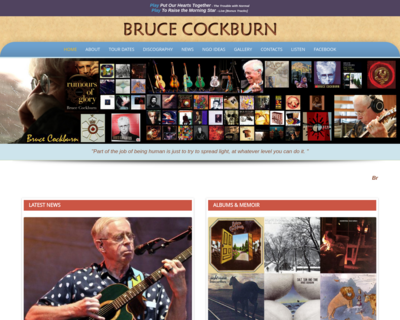