David Jacobs-Strain is a fierce slide guitar player who channels the musical spirit of the Mississippi Delta, and hand-hewn stories from his home in western Oregon. At ten years old he was busking on the streets of Eugene and Seattle, by nineteen he was playing at the New Port Folk Festival and opening for Etta James, and at twenty-one, he dropped out of Stanford to play music full time. “As I go further into music the path seems to change. When I first started playing I wanted to capture the feeling of the Delta blues. Now I want to tell stories; the sound and rhythm of the slide guitar are a channel for the characters in my head.” In “Hurricane Railroad,” Jacobs-Strain sets a scene on the fringes of Oregon: “There’s a tar-paper shack at the edge of the clear-cut/ blackberry vines for a front yard/ living out on power line road/ drinking rainforest water out of mason jars.” The mood is rugged but 12string-guitar groove sits playfully between Leo Kottke and Little Feat, and the blues is a feeling, as much as a scale or a style. On Jacobs-Strain’s recent release, Live with Bob Beach, the songs have become more personal and intimate. “The best songs seem to arrive as little discoveries -the less intention I have for them the better. If I already know what I want to say, what’s the point?” Although “Strong Believer” and “Thank You Nice Lady” deliver signature slide guitar and harmonica jams, the heart the of album is “Already Gone,” where Jacobs-Strain wrestles with the death of his long-time girlfriend “People ask me if you suffered/ I tell them one thing or another/ don’t they know I can’t protect them/ it’s only fear that misdirects them.” “The song came as a complete thought – the sound of the words came before the meaning. It was everything I had struggled to say for a year that I couldn’t put into words.” 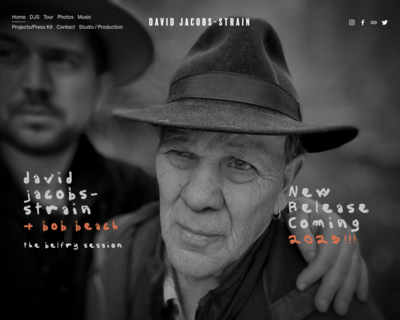