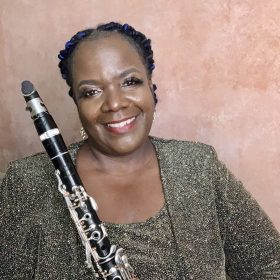 Doreen’s Jazz New Orleans brings the best of New Orleans to every performance. They are a group whose primary interest lies in spreading the culture and traditional music of New Orleans all over the world, through performances and education. Doreen’s Jazz has traveled the world performing their joyful, energetic, original, and soulful New Orleans jazz in 47 states and 24 countries and counting with outstanding musicianship. They have appeared performing in numerous radio and television shows, national commercials, music videos, and movies. Doreen’s Jazz has managed to establish a stellar reputation, millions of fans around the world and internet fame with more than 85 million views and several viral videos!

Lawrence Ketchens plays the tuba, valve trombone, drums, and piano with Doreen’s Jazz New Orleans. He is an innovative sousaphonist, who taught himself to play jazz by using his classical versatility to develop an original style of tuba playing. Lawrence lays a great foundation that drives the band in a positive way, he then burst into virtuosic improvisation that puts many horn players to shame. Lawrence Ketchens is the first to play the Sousaphone and Drums SIMULTANEOUSLY! Lawrence also arranges and produces music for Doreen’s Jazz and Master Classes. He has performed with Pete Fountain, Trombone Shorty, Al Hirt, Jon Faddis, Teddy Riley, Danny Barker and countless others.

Dorian Ketchens-Dixon is an exceptionally talented drummer. At age four, she premiered her talents during the Sioux Falls, SD Jazz Festival. She now travels the world as the drummer for Doreen’s Jazz. Dorian has performed at festivals worldwide (including the New Orleans Jazz & Heritage Festival), to standing ovations! She was nicknamed “The Ghost Drummer” by fans in Martinique because they could not see her tiny body behind the drums. At age 18, Dorian already has 14 years of performing experience. She has performed on 15 Doreen’s Jazz CDs, on stages of many sizes, movies, television commercials, and can even be spotted playing drums on (Don’t Hurt Yourself) in Beyonce’s “Lemonade” video.

Doreen’s Jazz New Orleans has represented New Orleans and the United States worldwide, performing in multiple countries, from Africa to Thailand. Doreen’s Jazz has also performed for four U.S. Presidents. Bill Clinton, George Bush Sr., Ronald Reagan, and Jimmy Carter. The band also boasts 30 volumes of CDs and 3 DVDs. In addition to being superb performers, Doreen and Lawrence are outstanding educators. Doreen’s Jazz,  regularly perform in schools and universities around the United States and the world. They teach students of many ages and languages about music, multiple genres, musical terms, performance styles, and techniques while spreading the culture and music of New Orleans before and after Hurricane Katrina. They also discuss the pandemic’s effects on the city’s performance culture.

It is almost impossible to sit through a performance of Doreen’s Jazz New Orleans without dancing, moving in your seat, shouting, clapping, or tapping your feet. This is the band that brought Jimmy and Roselyn Carter to their feet shouting, “Hey Now”; during an earlier Live Jazz Fest performance of “Iko, Iko”. Later, during the 2012 New Orleans Jazz & Heritage Festival, a man jumped up from his wheelchair and led the Second Line around the Economy Hall Tent. 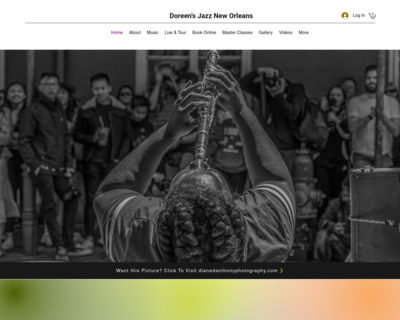