There’s just something about Ellis. She is at once funny and wise, thoughtful and uninhibited, and her captivating voice is matched by her uplifting lyrics. If you looked up the definition of open-hearted in the dictionary, you just might find her photo there. Ellis’ performances are transformational; she leaves her audiences better than she finds them, with softened edges & opened hearts.

A winner of several awards and honors, Ellis has been recognized both for her songwriting skills as well as her engaging performances. Many folk festivals have “audience choice” awards, and Ellis has claimed those honors at Falcon Ridge Folk Festival, Moab Folk Festival (3 times!), and Sisters Folk Festival. She also won the Grassy Hill Kerrville New Folk Contest, the midwest region of the Mountain Stage New Song Contest and the award for the Just Plain Folks (International) Best Female Singer-Songwriter Album. She has appeared on A Prairie Home Companion 4 times in the last 3 years as well!

After moving from Texas to Minneapolis at age 16, Ellis got her start singing her own songs at open mics where she quickly dropped her often-mispronounced former last name (Bergeron; her new married name is Delaney). She joined a rock band in high school while also setting up her own record label to put out her first solo CD Soft Day in 1996. In college at St Olaf, she fronted the band Bobby Llama and in 1999 the band was voted Sam Goody/Musicland’s Best Unsigned Band in America. Ellis went solo and began touring full-time in 2000.

She has also received several songwriting awards and honors, including Top Five awards at the Rocky Mountain Folks Festival Songwriting Contest, the Telluride Troubadour Contest, and the Kerrville Music To Life Songwriting Contest. She also won the award for Best Female Singer/Songwriter Album in the International  Just Plain Folks 2009 Music Awards.  Most recently, she won the Mountain Stage NewSong Midwest Regional Round and the Kerrville Grassy Hill New Folk Contest. 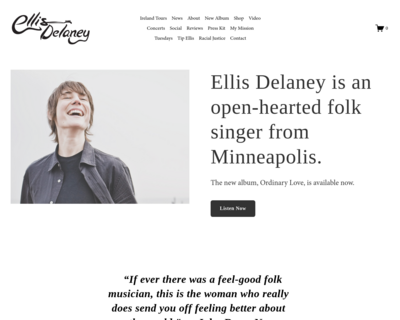