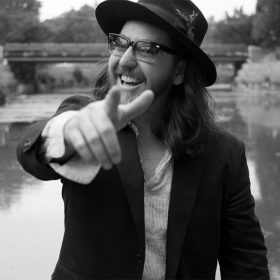 For most of us, soul music refers to a genre, a groove that swings through blues and R&B on its way to making our hips sway. But for Garrett LeBeau, it’s also about his soul: finding it, understanding it, and redefining its reality after liberating himself from his constricting past. The son of an Irish-American mother and Shoshone Indian father, LeBeau was raised on the Wind River Reservation in Wyoming — as a Jehovah’s Witness. LeBeau’s soul style certainly captures the groove, all right, with a gritty vibe and vocals that might draw comparisons to Boz Scaggs (with whom he’s toured) or even Ray LaMontagne, but it also digs deep, examining the dichotomies of his childhood experiences, the scars inflicted by his indoctrination into what he considers a cult, and the salvation he’s found through music.

On his forthcoming EP, he addresses his history head on, as well as the ongoing struggles of Native Americans and our common desire for love and happiness. “Music, for me, has always been therapy,” LeBeau says. The first song he wrote, at 18 or 19, was about his brother’s banishment for renouncing the faith — a wound still unhealed, even though their parents have since renounced it as well. On the EP track “Fading Light of Day,” he challenges the notion that earthly deprivation is a fair exchange for eternal life. You can’t live in tomorrow if you can’t live in today, he sings, in an understated baritone that conveys firsthand knowledge of that truth.

LeBeau had been working in construction, but right around the time the recession hit, he’d felt the urge to perform and approached the owner of a nearby venue. He got booked to open for Marcia Ball, and more gigs soon followed. Before long, he was playing famed Austin venues Threadgill’s and Antone’s. Legendary Texas singer-songwriter Willis Alan Ramsey caught his act and decided LeBeau should perform with former Clapton drummer/percussionist Jamie Oldaker, an Oklahoma native then living in Austin. “Willis wanted to see Jamie playing again, but Jamie didn’t want to play with many people,” LeBeau says. “But he heard me, and it reminded him of the Clapton stuff he did in the ’70s. So he approached me and was like ‘Hey, I want to be in your band.’” Legitimacy like that takes most players quite a bit longer to earn; Oldaker’s attraction speaks to the strength of LeBeau’s innate talent — which, frankly, resists a slew of comparisons because he’s never tried to ape anyone else’s style.

The musical isolation he experienced actually lends a purity to his work. “I can’t really say I ever learned to play other people’s music,” LeBeau affirms. “I just didn’t; I always wrote my own tunes.” Renowned Austin bassist and producer Roscoe Beck (Leonard Cohen, the Dixie Chicks) caught some of those tunes one night while performing with Ramsey on a shared bill with LeBeau and Oldaker. He told LeBeau he liked what he heard. A couple of weeks later, they hit a recording studio with drummer J.J. Johnson (Tedeschi Trucks Band, John Mayer) and keyboardists Red Young (Dolly Parton, Eric Burdon) and Stefano Intelisano (Jason Mraz, Steve Miller). LeBeau released Rise to the Grind, his only full-length album, in 2013. (He’s also released two EPs: Bitter Tree and Gone So Long.)

In the process, Beck learned LeBeau not only doesn’t write down his songs, he doesn’t actually know the names of most of the chords he plays. He simply creates and remembers. LeBeau was attracted to the blues because of its emotional core, which allowed him to pick it up quickly and form a foundation from which he could explore. He does pinpoint a couple of artists who drew him there, starting with Buddy Guy, whom he discovered while housesitting at 18. Calling himself “a humanist above all else,” LeBeau adds, “humans are at their best when they’re allowed to feel. We create music because it makes us feel something. What’s life worth if you don’t feel?” Then he cites a line from another inspiration, Native American writer, musician and activist John Trudell: “We need to think ourselves out of what we believed ourselves into.” Having done just that, he’s now intent on continuing to learn — and enjoying the love and happiness he’s found through music.