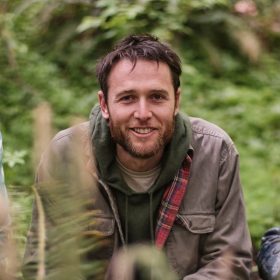 Jenner is a writer of songs and nonsense. He grew up singing folk music in wet chairs with his river guide parents and their friends. In 2015 he recorded his first album to sell to rafting clients, and they invited him to perform in their living rooms, leading to years of piecing together tours and cutting his teeth on the road with various bands and minivans. Today, the Oregon-based musician guides whitewater internationally, prefers to ride his cargo bike to shows, and teaches songwriting to young musicians.

The latest album, Planet I’m From, began on a Subway ride from Mets Stadium to Brooklyn. Jenner met producer Lawson White, and they embarked on a three-year saga that would eventually yield an 8-song world. It’s Jenner’s quirky heart-forward writing with a star studded Nashville cast – recorded all together in a room; you can hear the musicians leaning in, breathing, and listening together. It’s Jenner’s storytelling and raw delivery with the colors filled in, featuring highlight performances by Chris “Critter” Eldrige (The Punch Brothers, Live From Here) and Brittany Haas (Dave Rawlings & Gillian Welch). The soundscape is primarily acoustic – finger picked acoustic guitar, three-part harmony, old time fiddle, pedal steel, and broom sticks on a snare head.

“From the very onset, Jenner Fox’s whimsical serenade or dream or ‘wish to the Gods above’ called ‘Buffalo’ nearly charmed the pants off me and as odd as that sounds, his sort of funny, even surreal poetry is so beautiful. It doesn’t hurt that Jenner has a vocal aesthetic that feels overtly friendly and his folk drawl feels like a buddy having a talk and beer with you over the fence you both share.” – American Pancake

“Jenner combines the lyricism of Joni Mitchell and the commentary of Neil Young to represent the next generation of singer-songwriters.”— Grammy-nominated producer, Cookie Marenco.

“Jenner is a storyteller. His music is full of love, compassion and curiosity. The characters are relatable because they’re real folks. His stories are sincere and draw you in because they’re your stories. His songs make it clear that he is a true listener and observer of the world around him and will have you laughing one minute and crying the next, engaged with wide eyes and bated breath from start to finish.” – Lawson White, Producer (Lake Street Dive, Shania Twain). 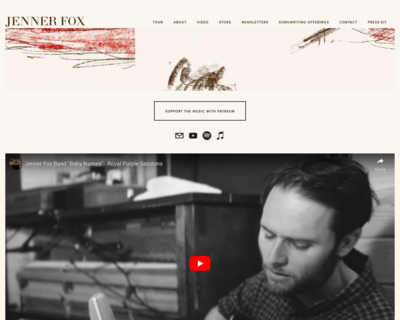