Kristin combines award-winning songwriting and percussive dance in performances that have been heralded “inventive” by the New Yorker and “haunting” by NPR’s Folk Alley. Since coming of age with two of America’s most beloved traditional music ensembles (Uncle Earl and the clogging company Footworks) as well as the “folk noir” songwriting trio Sometymes Why (with Aoife O’Donovan and Ruth Ungar), Kristin has turned her deep knowledge of timeless roots music into a knack for creating original songs with a similar kind of staying power.

Now based in Nashville, Kristin has become a respected voice in songwriter circles, with music recently heard on Showtime’s The Affair and ABC’s Nashville and songs co-written with or covered by Elephant Revival, Julian Lage & Chris Eldridge, Caitlin Canty, Michaela Anne, Joy Kills Sorrow, The Sweetback Sisters, Laura Cortese, and Peter Stampfel. Her song “Crayola Doesn’t Make a Color for Your Eyes” hit #1 on the kids’ music radio charts and has been covered by dozens of artists ranging from Tyne Daly to high school marching bands. Kristin has been a featured performer on NPR’s A Prairie Home Companion; her dancing feet have been heard in the film Cedar Rapids, and NPR’s Mountain Stage chose her 2015 performance as one of year’s ten best.

A Portland, Oregon native, Kristin made her way to Tennessee via Montreal, Cape Breton Island, the Canadian Arctic, Maryland, and Brooklyn. As a founding Artistic Director of the popular all-ages Miles of Music Camp, she facilitates life-long learning and community, enjoying nothing more than teaching a pile of square dance beginners how to do a Grand Chain.

"Inventive"
—The New Yorker
"Sublime. Like a watercolor painting set to music."
—The Boston Globe
“Ethereal folk tunes, jangly Americana and indie-heavy pop... Gondolier is nothing short of a stunning collection of songs.”
—The Bluegrass Situation

Portland, Oregon - Based in Nashville, TN 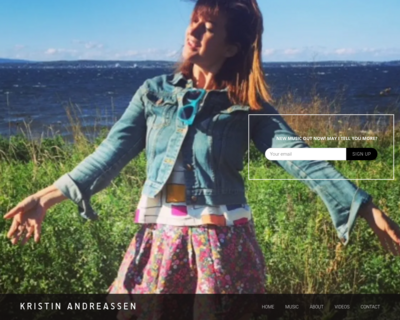