The collaborative efforts of these four gentlemen cover several decades, and their overlapping bands and projects brought them to the attention of Emmylou Harris, who named them after her Red Dirt Girl record. When the band asked her if they could use the name Red Dirt Boys for their debut record, she replied, “Only if I can sing on it.”

The band still tours with Emmylou, and besides serving their special brew of New Orleans-influenced music, they collaborate on the solo efforts of Phil Madeira and Will Kimbrough.

Infectiously happy to be together, the joy that exudes from the stage when these dear friends perform together is palpable. You can cut it with a knife.

Chris Donohue – bass and vocals – Chris came to fame in the 1990s playing first with the seminal Circle Of Dust, and then the Athens Georgia band Vigilantes of Love. It was on the recording of their Blister Soul record that multi-instrumentalist Madeira came in as a ringer, playing Hammond organ and lap steel. Eventually, Chris moved to Nashville, and worked with Sixpence None The Richer, playing on their huge hit “Kiss Me”. He and Madeira began a long term recording relationship and friendship.

Madeira had come to prominence first playing with guitarist Phil Keaggy, and then as a songwriter, delivering hits for Garth Brooks, Alison Krauss, and Keb Mo.

Meanwhile, guitarist Will Kimbrough and drummer Bryan Owings were forging ahead with Will’s band Will and The Bushmen, with a record deal and a project recorded at Bearsville Sound.

They had the world on a string, but things happen and don’t happen.

Owings and Kimbrough moved to Nashville, where Will became a session guitarist and toured with Rodney Crowell, who featured Will often. Will became known for great songs, and artists like Rodney Crowell and Jimmy Buffet began recording his work.

Owings began playing drums for Buddy and Julie Miller, where he met Madeira and became fast friends, uniting over their love of vintage drums and rhythm, as well as international cuisine. Touring Europe with Buddy Miller forged a lasting friendship.

Chris Donohue, also a Buddy Miller alumnus, found himself playing with Emmylou Harris in the early 2000s. In 2007, Owings and Madeira joined Emmylou, in an early version of Red Dirt Boys.

Everything clicked when Will joined the Red Dirt Boys in 2011. The friendships were already intact but grew stronger. You’ll hear about infighting in bands, jealousies, affairs, falling out… That is not the RDB story.

With Kimbrough and Madeira writing the bulk of the material, and playing guitars and keyboards, and sharing lead vocals, Donohue and Owings hold down the greatest groove since Al Jackson and Duck Dunn. The result is a spicy gumbo, filtered by the diverse influences each musician brings to the party. You’ll hear strains of Thelonius Monk and George Jones, Bob Dylan and Mavis Staples, Dr. John and John Coltrane.

The band debuted their music at the Nowhere Else Festival, hosted by the great Over The Rhine in 2016, returning to play again in 2017, while backing Over The Rhine. 2019 saw the band take the Cayamo music cruise by storm, winning dozens of fans who had never heard of them before.

Red Dirt Boys follow a tradition of mixing it up, similar to The Band, Little Feat, Tedeschi Trucks, and others. Don’t miss your chance to hear them! 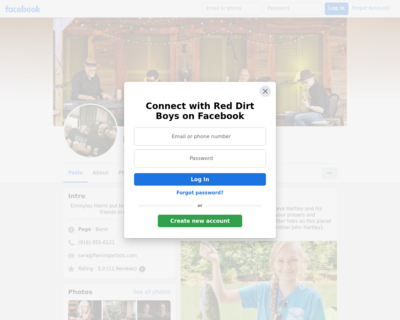