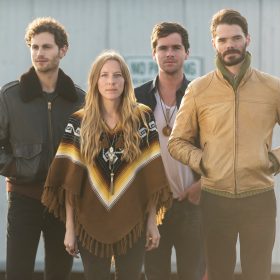 For many bands, and especially those who’ve been together for several years, recognizing maturation, progress or palpable evolution is a daunting task. Is it continued creative accomplishment that signals progression? Or perhaps it’s profitable commercial endeavors? The answer is often quite unclear. Six years, two albums and countless gigs after first forming as a band, River Whyless, the North Carolina-bred folk-rock outfit has discovered their evolution is a subtler albeit monumentally important one. Deep in the throes of writing and recording their bold new album, Kindness, A Rebel, the four musicians reached a necessary and collective understanding. Namely: this band is their lifeblood, their family and their love. To that end, with unspoken acceptance, the members of River Whyless, each songwriters in their own right, collectively put aside their respective egos, coalesced around each other’s creative vision, and fully embraced the beauty of their enduring partnership.

“It was a feeling of openness and hope and acceptance,” says singer-violinist Halli Anderson of the multi-week sessions with producer Paul Butler (Devendra Banhart, Michael Kiwanuka) that resulted in some of River Whyless’ most dynamic, genre-bending and heartfelt material yet. Creatives regularly waver between honoring their own creation and rallying around larger ideas for the benefit of the group. But with every member of River Whyless now charting a life outside the band, and also writing on their own, when coming together to record Kindness it was never more crucial they be open and honest with each other.

Despite having never felt more unified in their vision for the future, much as they’ve navigated their freewheeling career to date, River Whyless is choosing to not predict what lies ahead. Allowing their creative union to continue guiding them, they insist, remains their only constant. “It feels like you’re on a journey with your family,” McWalters says of the satisfaction of being in a band like River Whyless. “It’s a beautiful thing.”

Another indicator that @newportfolkfest is not a normal festival in any way. From our days at the fort to this pandemic, they’ve looked out for us. Thank you Newport Folk Festival and @imajs for everything you do for the musical community. Much love to you and everyone who is helping with this relief program. #folkfamilyrelief link is in @newportfolkfest profile.

Things are developing fast these days. As most of you already know, the RW spring tour has been postponed. That’s a bummer. But the upside is...Christina and I got a puppy! We’d like to officially welcome to the RW family Ringo Starr Torquato McWalters. He’s a 12-ish week-old little mutt we adopted from a local shelter. He’s a bright little bundle of joy. We hope his little mug will brighten your isolation.

It’s something of a foregone conclusion at this point, but we wanted to officially announce that the River Whyless shows in March, April and May will not occur as scheduled. We’re working to find new dates. We’ll only make an effort to bring you all together when it has become abundantly clear that it is safe to do so. We’ll keep everyone updated with postponements as things are finalized. We are, of course, disappointed. But it’s much more important that we all do our part to help each other get through this crisis, and that means making collective and individual sacrifices for the good of us all. Please wash your hands and do your best to keep your distance. There’s a lot of inaccurate information out there, but there’s also some good information. This is indeed a serious issue, but if we all follow the instructions and guidelines offered by doctors and health officials, we will get through this as safely and quickly as possible. Lastly, if you have the means, please consider supporting your favorite touring artists by purchasing their music or merchandise directly from their online stores. There are a lot of artists (local, national, and abroad) who could use the support right now. We look forward to seeing you all soon. In the meantime, stay healthy! With love - Daniel, Alex, Ryan and Halli

JUST ADDED! New tour dates are up and tickets go on sale this Friday! riverwhyless.com 💜💙💜💙