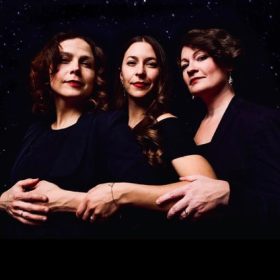 If the whole is greater than the sum of its parts, then The Sweet Water Warblers are no exception. Comprised of Michigan songbirds Rachael Davis, Lindsay Lou, and May Erlewine, the folk trio’s organic vocal harmonies and seamlessly interwoven instrumentation leaves listeners breathless.

The Sweet Water Warblers came together in 2014, for a single performance at the Hoxeyville Music Festival upon request by the promoter. From the beginning, there was a unique connection between the three artists, a bond forged by a mutual passion for social change and expansion of the soul through music. Each of the ladies’ brought with them a regarded solo career within the Americana and roots worlds, and with them individual perspectives on traditional music. Whether it was the gospel and soul-laced melodies uncovered in Davis’ music, the Appalachian folk and country-leaning ballads belted out by Erlewine, or the versatile country soul and bluegrass roots of Lou’s band it was clear from the beginning that the culmination of their talents would be unparalleled.

With three-part vocal harmonies that are sublime, the singing sirens and multi-instrumentalists saw the release of their first EP, With You, in 2017. The repertoire swinging from gospel and bluegrass to soul and even joyful interpretations of pop, AmericanaUK called it, “top drawer roots music.”

The Warblers will release their first full studio album, The Dream That Holds This Child, on May 15. Produced by Dan Knobler (Lake Street Dive, Caroline Spence), the album serves to empower and uplift spirits, and offer refuge, solidarity and support through its focus on modern femininity. “Our sound is a place of refuge. Its roots are deep, and its arms are stretched open wide,” says Lou. “This is the gospel of creating beauty from pain.”
“We recognize an imbalance in the imagery and symbolism of the divine,” adds Davis. “When we sing gospel, we sing from a source deep within us that honors and elevates the feminine as much as the masculine.” The artists’ statements come with disclaimer — not to mistake the album’s nurturing tenderness for weakness. These songs bloomed from the deep darkness of the earth and were sung awake through relentless storm. As Erlewine puts it, “We are here, very much, on purpose.”

Mad At You — The Sweet Water Warblers

Do You Know The Chorus — The Sweet Water Warblers