Matt Lorenz [The Suitcase Junket] was raised in Cavendish, Vermont, the son of schoolteachers. He learned to sing by copying his sister Kate; the siblings are two-thirds of the touring trio Rusty Belle. Lorenz graduated from Hampshire College in Amherst, Massachusetts, in 2004, having taught himself to throat-sing, inspired by a South Indian cooking class. On moving day, he pulled a guitar, filled with mold and worse for wear, from a dorm dumpster. He fixed it up and started pulling songs out of it. That was the beginning.

Since then, The Suitcase Junket has built a powerful fan base in his native New England and far beyond. Festival plays — past and forthcoming — include Mountain Jam, FloydFest, FreshGrass, Green River Festival, Hardly Strictly Bluegrass, Joshua Tree, and Winnipeg Folk. The Suitcase Junket has combined streams of 1.25 million on Spotify and was named to Spotify’s Best of 2016 Folk & Americana and Blues & Roots Rock playlists. Lorenz caught the attention of National Public Radio who chose his video session for “Earth Apple” from his 2015 album Make Time as one of the year’s favorite sessions. His music puts him in the company of artists working the border of Americana and rock — Shovels & Rope, M. Ward, Edward Sharpe & The Magnetic Zeroes, Sam Amidon, Alabama Shakes, and The Record Company.

The latest album from The Suitcase Junket, Mean Dog, Trampoline is populated by characters in various states of reverie: leaning on jukeboxes, loitering on dance floors, lying on the bottoms of empty swimming pools in the sun. Despite being deeply attuned to the chaos of the world, singer/songwriter/ multi-instrumentalist Matt Lorenz imbues those moments with joyful wonder, an endless infatuation with life’s most subtle mysteries. And as its songs alight on everything from Joan Jett to moonshine to runaway kites, Mean Dog, Trampoline makes an undeniable case for infinite curiosity as a potent antidote to jadedness and despair.

“I’ve been blessed in my career as a producer to have worked with some remarkable artists, but I have never worked with anyone quite like Matt Lorenz / The Suitcase Junket. Besides making the complexity of everything he does look effortless, he’s a truly gifted singer and an amazing songwriter. We had a blast making this record and I’m anxious to share it with the world.” – Steve Berlin

The Suitcase Junket • When the Battle is Won (LIVE)

The Suitcase Junket • Last Man on the Moon

He sings in a Dylanesque tenor that sounds heartbroken one minute and a million miles away the next, and he writes songs that’ll make you bleed.
—Kenny Berkowitz, Acoustic Guitar
Lorenz is a true, old school one-man band. He does it all by himself, both live and in the studio... Lorenz’s skills are considerable and the list of weird equipment operates mostly as an effective hook to bring in the curious.
—Chris Conaton, Pop Matters
"So No” is a track that has a life all its own. I am taken back to Newport Folk where The Lumineers cast off into the audience to perform foot-stomping renditions of their energetic tunes…the difference is that Matt Lorenz is one man, where the Lumineers are like 5 people and the guy injects just as much energy, life and vibrancy into his songs as any multi-person act. He is a true force of nature, a feverous ball of positive energy and light.
—Brian Carroll, Red Line Roots 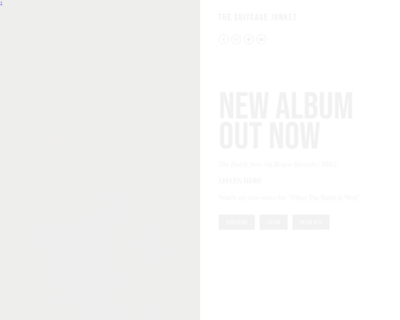