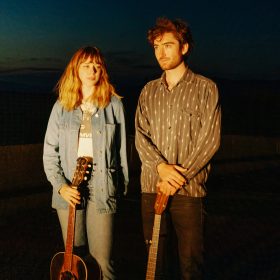 Vivian Leva & Riley Calcagno’s self-titled record is old-soul roots music to its core. Though both just out of college, the duo’s musical talents extend far beyond their years. Produced by GRAMMY-winning Cajun roots heavyweight Joel Savoy at his Louisiana studio, Vivian Leva & Riley Calcagno is not some soulless collection of songs imitating previous masters of American music. Rather, the pair has responded to one of the darkest eras in American history with an album of stunning breadth and originality. With mass protests, fires raging near their current home in the Pacific Northwest, and no prospect of touring anytime soon, it was an aptly biting, bittersweet group of songs for an uncertain time. Yet, Leva and Calcagno balance this with a sense of optimism—a notion that at our most vulnerable we might emerge better humans because of it all, perhaps beginning with our own intimate relationships. The eleven tracks elegantly reprise the deep threads of old-time and classic country present throughout Leva’s debut album—she did grow up in rural Appalachia outside Lexington, Virginia, the daughter of celebrated old-time musicians, after all. However, the pair fluidly meld this traditional backbone with fresh iconic melodies, expanded production, and the tightly wound vocal harmonies of indie folk. It’s an artistic statement made from this moment but built to last.

Vivian Leva & Riley Calcagno follows Leva’s critically acclaimed 2018 debut, Time Is Everything, which garnered rave reviews from publications like Rolling Stone who said the album shone “a light on the past without giving up its place in the present.” Leva was hailed for her mature, deeply grounded songwriting, surprising for a songwriter not quite 20 years old at the time. She wields the same golden pen on the new album, though Calcagno lends a hand too with songwriting and arrangements, pulling Leva’s songs in new directions and down unexpected pathways. While their previous album centered around the passage of time, the couple’s new record explores themes of space and distance. Leva and Calcagno were working on these songs well before COVID, but were separated by half the country while attending different universities. With Leva on the West Coast and Calcagno in Ohio, the two sent each other songs as voice memos or worked on them during weekend visits. “We would try to write music in these little spare moments,” Leva explains. “It’s so hard to communicate with someone over the phone. A song is a place that you can map out how you’re feeling and how you want to share your feelings.” You can hear the wistfulness of distant partners in her song “On the Line,” where Leva asks “Why don’t you tell me about your day?”, or in “Love and Chains” where she sings “Don’t talk about love and chains, let’s not talk about the plans we made, why don’t we sit and watch the sunlight fade?” Much of the album’s sonics have a golden hour hue, that bittersweet feeling of “loving with leaving on our minds,” as the duo sings on the second track.

Both Vivian Leva and Riley Calcagno grew up in the Appalachian stringband tradition, have noted parents in the old-time scene, and spent formative years running wild around festival campgrounds. They are steeped in an instrumental culture of hard-picking and virtuosic musicianship; indeed there are plenty of online videos of them tearing through all-night jam sessions. Leva recently joined Calcagno’s former teen stringband The Onlies, releasing an album of fire-breathing fiddle tunes in late 2020. However, what sets Leva and Calcagno apart—in addition to their work as instrumentalists—is their almost preternatural talent as songwriters. Great pickers don’t necessarily make great songwriters; it’s an entirely different art to be able to translate the world of rural Appalachia into a country song that can still make a personal point. As young artists stepping into the spotlight during one of the most brutal periods in our history it’s clear they’ve built something that can last, something that speaks to our present time while reminding us of the best parts of where we came from.