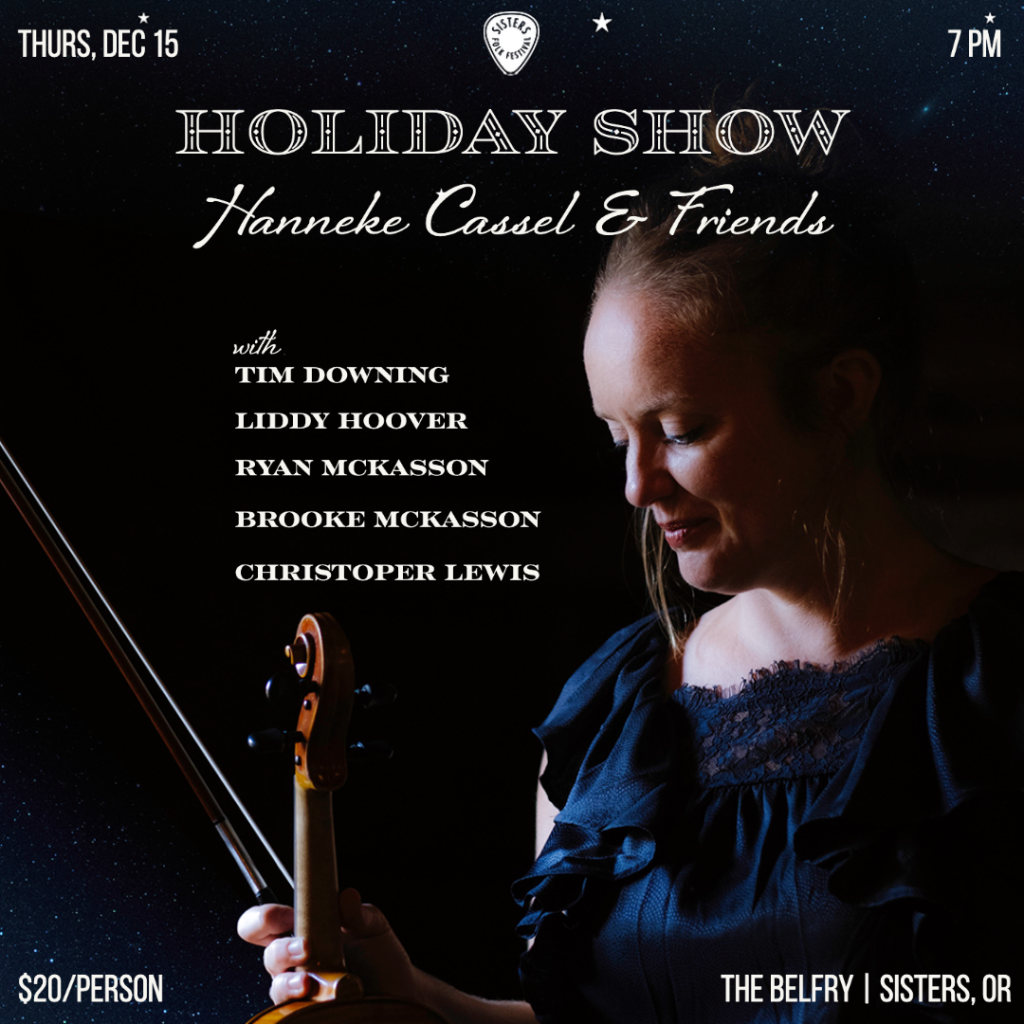 Join us for a night filled with fiddling, singing, and lots of holiday joy. Scottish-American Fiddler and native Oregonian Hanneke Cassel will be accompanied Ryan McKasson, Brooke McKasson, Liddy Hoover, Tim Downing, and Christopher Lewis for a performance of holiday favorites and new tunes from Cassel’s 2021 album “O Come Emmanuel”.

Effervescent and engaging, Hanneke Cassel’s music fuses influences from the Isle of Skye and Cape Breton with Americana grooves and musical innovations. She has performed and traveled across North America, Europe, Australia and Asia. Cassel’s music is a blend of the contemporary and traditional, described by the Boston Globe as “exuberant and rhythmic, somehow wild and innocent, delivered with captivating melodic clarity and an irresistible playfulness.”

A native of Port Orford, Oregon, Hanneke started out as a Texas-style fiddler and went on to win the 1997 U.S. National Scottish Fiddle Championship, which awarded her the opportunity to study with 2022 Sisters Folk Festival performer, Alasdair Fraser and introduced her to fiddle camps and the folk community — both of which continue to play an integral role in her life.

Cassel is joined on stage by five accomplished musicians in their own right. Washington-based husband and wife duo, Ryan and Brooke McKasson have toured nationwide performing Celtic and American traditional folk music as “The McKassons” to critical acclaim. Liddy (Voetberg) Hoover is a multi-instrumentalist, songwriter and national Texas-style fiddle champion. Providing the driving guitar sound in the band is Canadian-native, Christopher Lewis – a graduate of Berklee College of Music and longtime collaborator with Hanneke.  Rounding out the group is Tim Downing, a fellow Berklee graduate and scholar of classical music and Jazz. Downing notably toured with pop/rock singer Natalie Grant for 9 years prior to joining this group on  tour.