“For me, each painting is a statement – every aspect of the presentation is important. My architectural background contributes to my designs. I carefully select a title for each painting that reflects the spiritual character of the work.  I paint to share beautiful moments. Art is the pursuit of delight in submission to truth – it is frivolous virtue. My task is to delimit or refine visual information and share perceptions to most accurately convey the experience of the moment.   ‘Plenary’ captures the early morning light at the height of fall color. Creation shouts in joy with each unique sunrise – each new dawn reminds us of God’s relentless favor. We are renewed, refreshed and we are invited to join the celebration.  It is my honor to participate in support of My Own Two Hands and The Sisters Folk Festival. The value they bring to my family and the community can’t be overstated.” 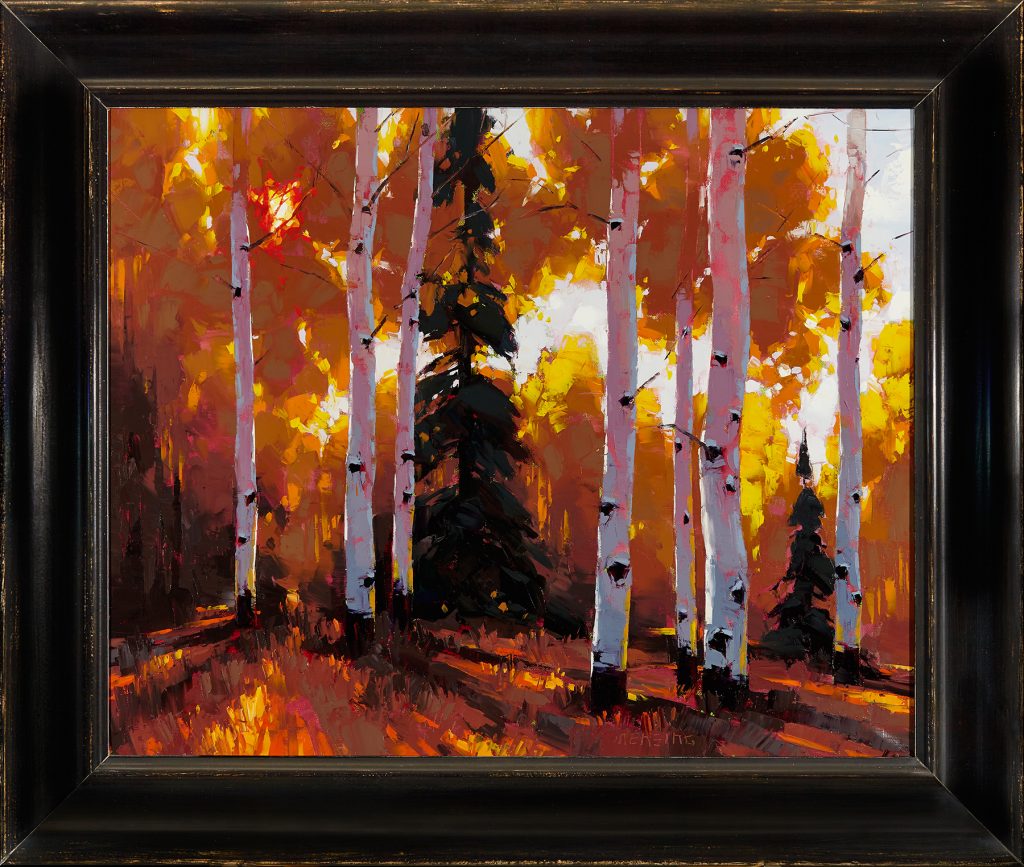 Dawn’s Early Light is from a photo I took of pinnacles at Smith Rock State Park.  Since I have a view of Smith Rock from home it is an ongoing inspiration. I have an eastern view, so I drove to the park to get the view looking west. This is an early morning shot…I am most attracted to what is often called “the golden hour,” more accurately the minutes at dawn or dusk when most values are muted and highlights take center stage.

I have the privilege of living in the High Desert of Central Oregon. From my windows I look down upon the wild and scenic Deschutes River. Our panoramic view includes the Cascade Mountains to the west, and the Ochoco Mountains to the east. Whether I am painting landscapes or interior studies, I am always conscious of the beauty of solitude. During this time of social distancing it has become a strength as being out in nature alone or secluded in my studio gives me strength. 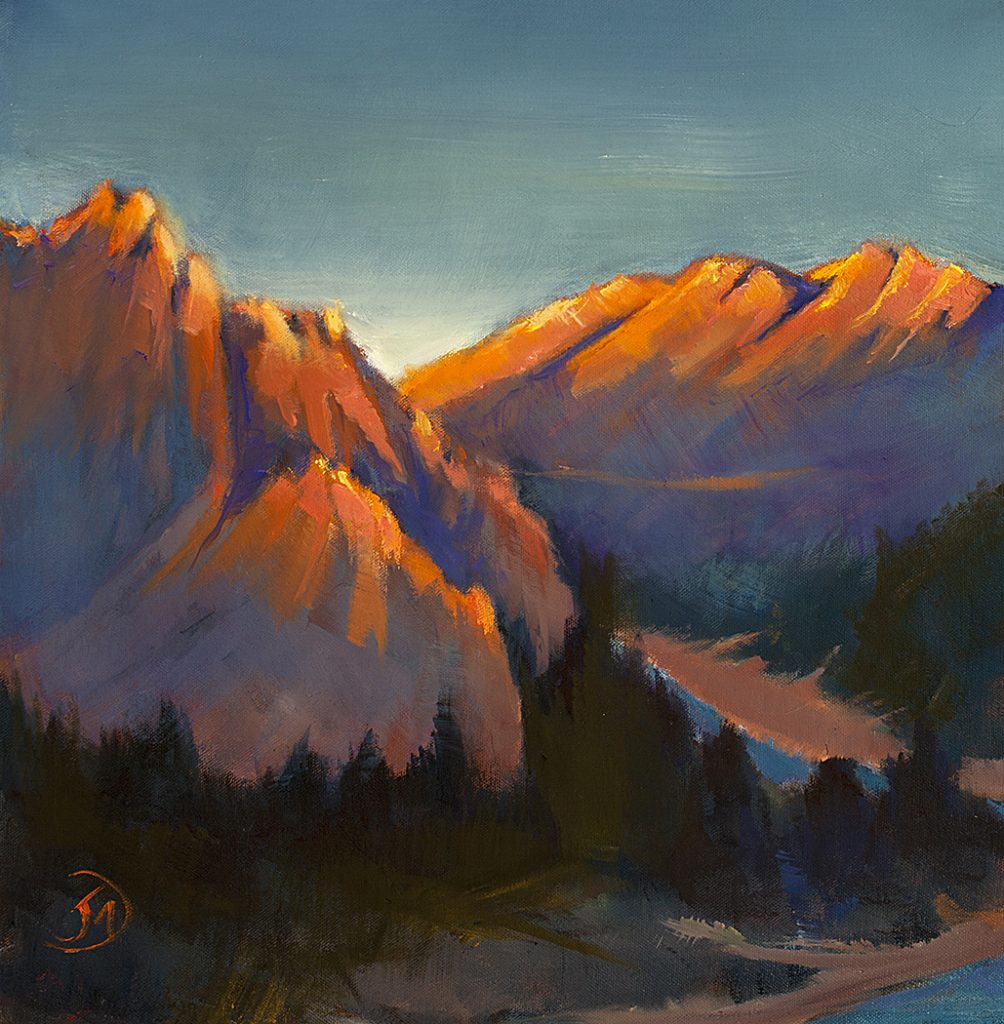 I’ve always been fascinated by passing clouds when shifting shafts of sunlight skip across the landscape.   ‘April Showers (with Pegasus)’, a colored pencil on museum board rendering from my latest body of work ‘Seasons Of The Sisters’ showing exclusively at Sisters Gallery and Frame, depicts an early morning rain squall over our beautiful Three Sisters mountains. April showers, as the saying goes, brings May flowers in a season of rebirth, renewal and growth: a new dawn. Pegasus, the immortal winged steed of Greek mythology whose constellation rises in April low on the eastern horizon in the hour just before sunrise and whose appearance was considered a harbinger of Spring and seasonal transformation by the Greeks, can be seen cantoring in the billowing storm clouds above South Sister.

In these difficult times, perhaps now more than ever we can find hope and inspiration in George Harrison’s lyrics: 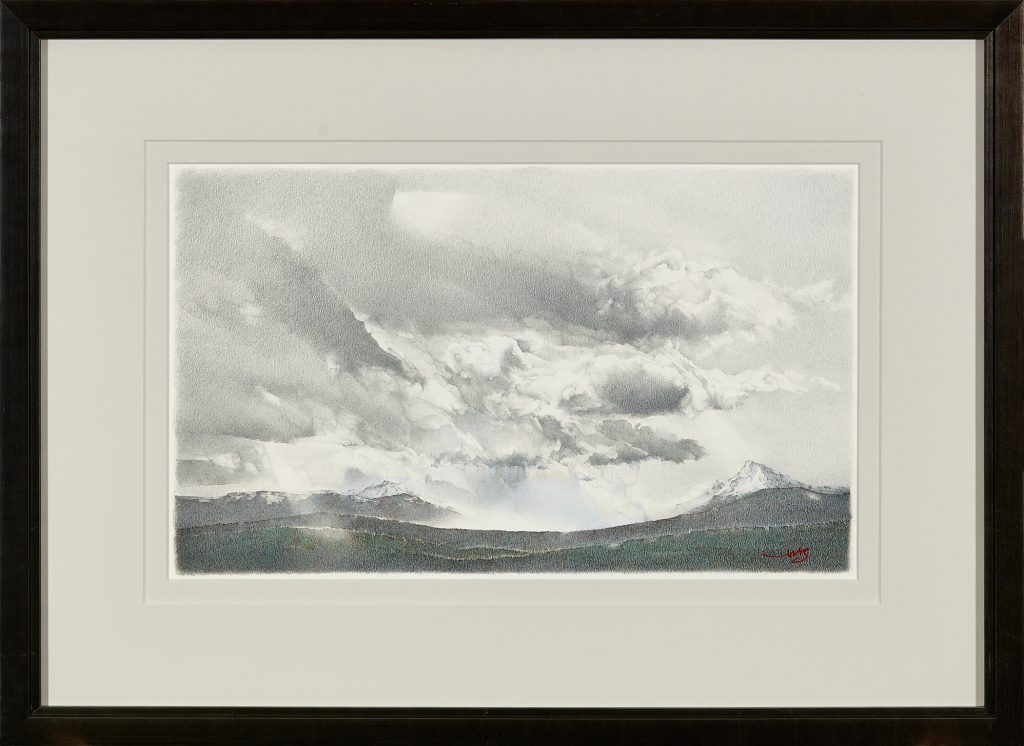 I see the world around us in many layers and that is just the way I paint — applying many layers of paint, ink and pencil details. Many layers are transformative for me and eventually bring satisfaction. I am by no means trying to change the world with my art. I am just so thrilled to be alive and painting every day. Hopefully, people will see joy and possibly some of Nature’s beauty when looking at my work. 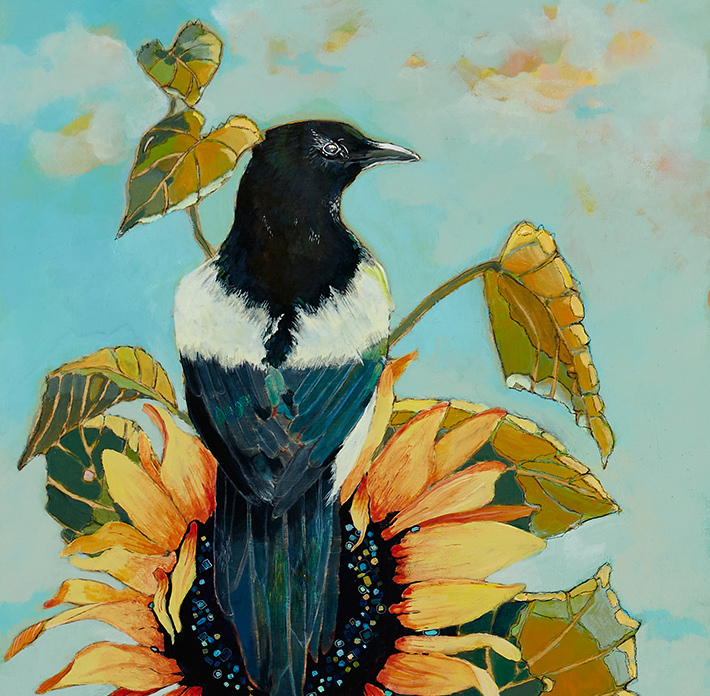 “Sierra has been into art since the first class I had her in when she was a freshman. She has only improved since then. She is dedicated, thoughtful, and giving with her work, and I know that the arts are a really important part of her life. I know that she will always be involved in the arts one way or another, passing it along and helping others. “ 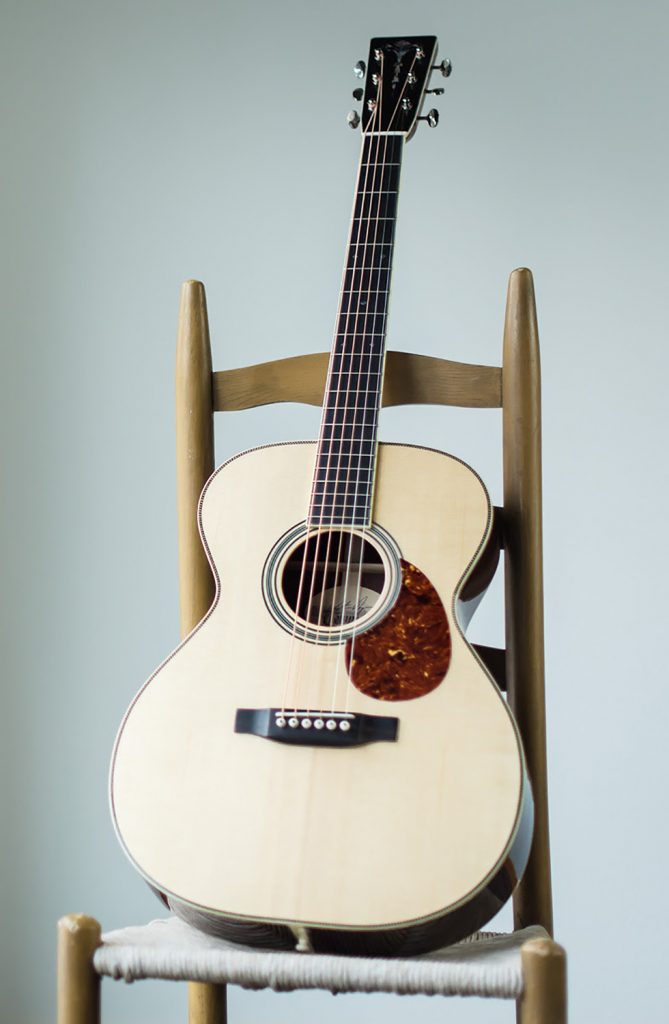 Thompson Guitars is a small company located in Sisters, Oregon producing handcrafted acoustic guitars. Preston Thompson started making guitars in the 1980s and studied Golden Era guitars from the 1930s in order to replicate that vintage tone that players are always on the search for. The playability and craftsmanship of Thompson guitars are highly regarded in the industry with support from dealers both domestically and internationally.

Preston put together a team of individuals that bring years of experience and knowledge to the company fostering the reputation Preston established early in his career.

“We are especially proud to be located in this thriving musical community, home of the Sisters Folk Festival and Americana Project. We are very appreciative of receiving the Spirit of Giving award this year in recognition of our donation of a specially made ‘My Own Two Hands’ guitar for the past five years that is sold during the ‘live’ auction event.  We are thrilled each time one sells knowing that the money is used to continue music education for the next generation of players and music lovers. This year the SFF will need all the support it can get with the current circumstances going on in our country and world,” says general manager Christine Funk.

“I had the honor and pleasure of working with Bill for nine years building guitars and ukuleles. When I started working with Bill, my wood working expertise was limited to a hammer and a power drill. He taught me so much, not only about wood working, but about life. I especially appreciated his sense of humor, and his ability to turn lemons into lemonade whenever we had an instrument building catastrophe!  Congratulations Bill!”   – David Perkins

“Bill MacDonald took volunteering to a new dimension. I can’t remember Bill taking a day off. I also can’t remember him ever saying to a student, ‘No I can’t help you.’ Bill will be sorely missed.”  – Tony Cosby

“Bill was a craftsman, an inventor, and a perfectionist. David Perkins and I, along with about ten others, were fortunate to take a summer guitar building class with Bill in 2010. That fall, David found time in his busy schedule teaching high school Chinese to start volunteering with Bill in the wood shop guitar classes and I started volunteering a year later. When Bill began his ukulele classes, he asked David and me to assist him. The semester ukulele classes varied from five to 15 students. Bill and David had a good sense of humor and the three of us enjoyed working together and with the students. While David knew the students and was used to teaching large classes, Bill was at his best when he worked one-on-one with a student. We would send students to Bill one at a time where he would help each student through a difficult step or find a way to fix a problem or mistake. During this time, he would quietly get to know each student on a more personal level, always with assurances that almost anything could be fixed. Bill excelled at innovative and unique solutions to each dilemma that presented itself. By the end of the semester, each student took great pride in having built a quality heirloom instrument.

We all have fond memories of Bill during any final step when, with a quirky smile and a twinkle in his eyes, he would encourage the student to wave his or her arms over the glued/clamped/repaired instrument and say ‘Haji Maji’ as he managed to get every student to smile and play along. My records show that over 150 ukuleles were hand crafted in Bill’s high school ukulele classes!”  – Marcy Edwards

“If someone told me I could learn to build a beautiful ukulele or a fine guitar from big ole’ giant slabs of wood – not from any kind of ‘kit’ – I would most likely declare ‘Retreat!’ having great skepticism in my own abilities for such a daunting task. Unless, that is, my teacher happened to be Bill. With quiet confidence, Bill would guide you through the scariest hurdles of most any project – he did it many times for me! I ran across a thank you card and letter from students who completed one of Bill’s ukulele classes. Each student had written a most sincere and genuine thank you note. A different bright color of felt marker was used to represent everyone of them. Sweet! As I read through their words, recurring common themes became apparent: ‘Thank You for teaching and helping us every step of the way!’ ‘You spent SO much time, thanks for your patience.’  ‘Thank you for all the extra help you gave us inside and outside of class to get our ukes built!’  ‘It was so much FUN!!!’

To illuminate a person, regardless of their age or skill level, with a sense of self-confidence and the belief they can indeed accomplish what may seem impossible – that is inspiration. For Bill, this inspiration went full circle. He constantly spoke of how impressed he was with ‘those kids’ and how enthusiastic they became when an instrument began to take shape before their eyes. In turn, their enthusiasm stoked the fire of inspiration in Bill. Every class, every term, Bill looked forward to seeing big wide grins light up his students when their first hesitant strums filled the wood shop with music. Of course, this put a HUGE grin on Bill’s face, too! He knew all along they could do it! As a teacher, his hope was that these many young folks would eventually come to understand they had perhaps achieved more in class than building an ukulele to cherish. It was Bill’s heartfelt wish that through this journey his students discovered an additional valuable asset to accompany them in life: Inspiration.”   – Rita Garolis McDonald 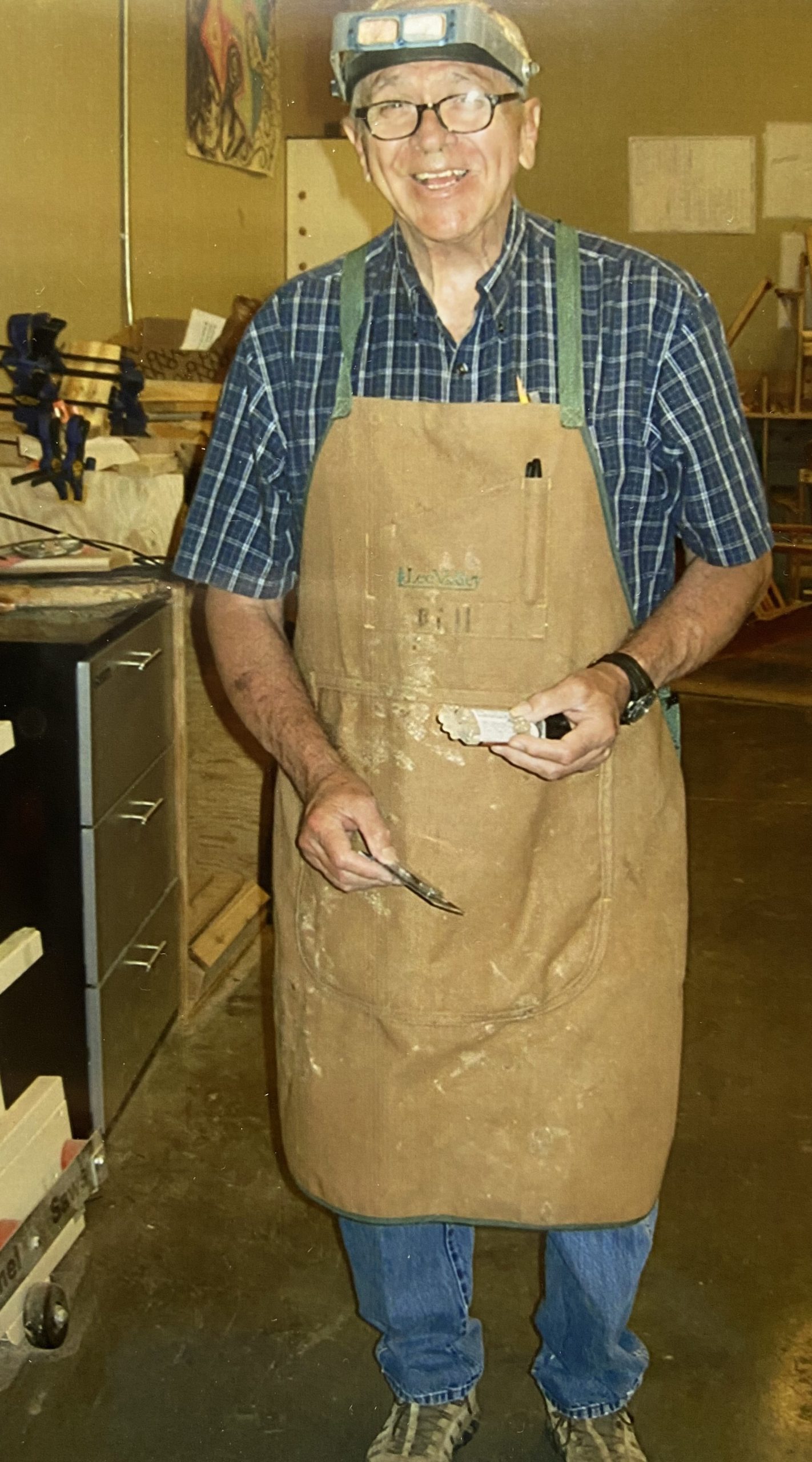 The late Bill MacDonald in his element, providing inspiration to students of all ages. 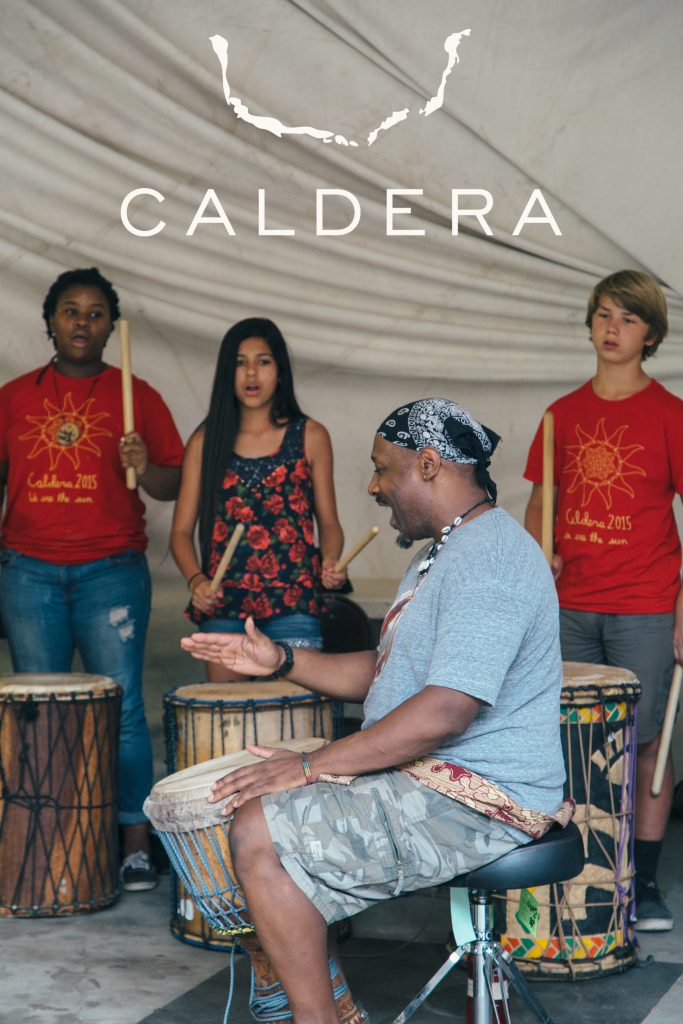 The Ben Westlund Advocate for the Arts Award goes to Caldera, a partner organization to Sisters Folk Festival and site of the Americana Song Academy since its inception. Caldera is a catalyst for the transformation of under-served youth through innovative, year-round art and environmental programs. Since 1996, Caldera’s Youth Program has served 15,000 Oregon middle and high school students in rural and urban communities, including Sisters.

Through their Artists in Residence Program, Caldera supports professional artists to build skills, relationships, and projects that inspire growth, combat oppression and activate change. These residencies culminate in monthly winter Open Studios, which showcase the work of Artists in Residence and Youth Program students for the Central Oregon community. Caldera’s programs nurture individual creativity to ignite self-expression and transform the way people engage in their lives, families, and communities.

“Caldera is honored to be the recipient of the Ben Westlund Advocate for the Arts Award. As always and in these difficult times, music, the arts and self-expression are so vital for young people, creatives and our local communities. Our partnership with Sisters Folk Festival sustains and strengthens all of us.” – Rene Mitchell, Board Chair

“Caldera made me see that art is more than just fun playtime crafts. Art is all around you, art can be found in everything! Art isn’t just paint and paper. It’s the thoughtfulness and detail that goes into designing a building, dress, or cake. It’s the photograph of the mighty mountains that we see everyday but don’t notice their beauty till it’s shown to us in a new way.” – Jaclyn Reynolds aka Lil Miss Hollywood, Youth Program Alumna