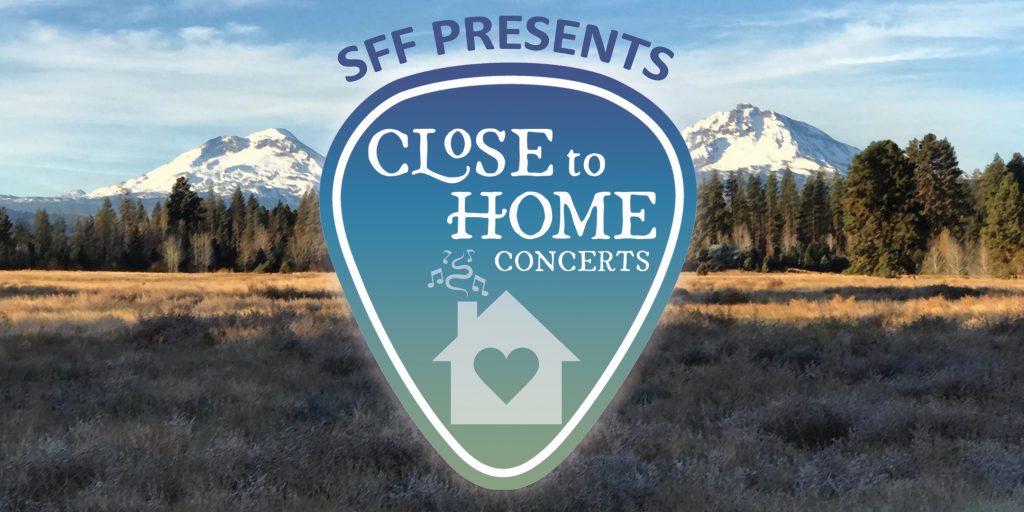 SOLD OUT – THANK YOU!

If you’d like to be placed on a waiting list, send us an email with the DAY you wish to attend and if you want a pod for 2 or 4 people.

We will be producing a high-quality livestream of this event which you can purchase for just $30 for all three days. Watch the concerts live, or on your own schedule any time through September 30. Enjoy a little piece of Sisters and support Sisters Folk Festival during COVID-19.

We are so excited to bring some of our favorite artists for these VERY SPECIAL concerts on the lawn at our very own Sisters Art Works building.

The seating area is made up of nine rows of seating pods that can accommodate 2 or 4 people each; individual tickets will not be sold — only seating pods. Pods are spaced a minimum of 6′ apart. Concert-goers must wear a mask or face covering over the nose and mouth except when seated in their area.

Concert-goers must bring their own low chairs (can’t roll a basketball under the seat) or blankets for seating.

SFF will be taking every measure to ensure your safety at this event, including hand sanitizing/hand-washing stations; constant sanitizing of high-touch surfaces like porta-potty latches, counters, etc.; touchless payment systems; and plexiglass shields between volunteers and guests at check-in, merchandise booth and beverage area. If you are not comfortable with wearing a mask or other face covering over your nose and mouth when outside of your seating pod, please do not attend this event.

There will be a food vendor at the event, and SFF will be selling beer, cider and non-alcoholic beverages. All food and drink must be consumed inside your seating pod, where you are not required to wear a face covering. 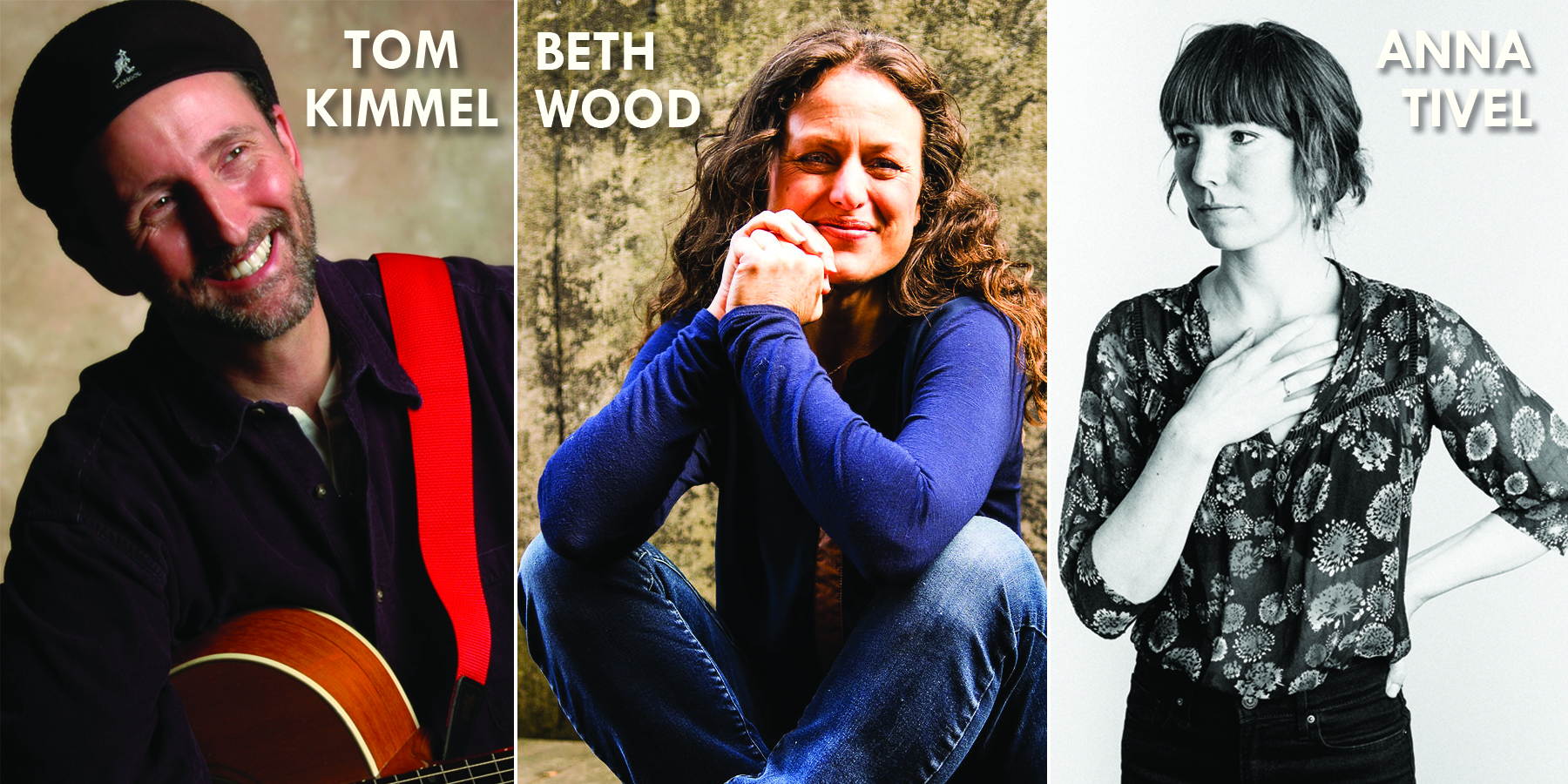 Songworks in the Round: An evening with Beth Wood, Tom Kimmel and Anna Tivel

Texas-raised, Oregon-based singer-songwriter Beth Wood has labored in the world of independent music for 23 years, morphing from a young, classically-trained, folk-tinged singer-songwriter to a wailing southern rock band leader to a college-circuit coffeehouse sweetheart to a well-respected nationally-touring poet and troubadour. Through all of these incarnations, Wood has remained true to herself and to her artistry; she has done it her way. Out of that fierceness and commitment to her craft comes a canon of work that cannot be denied. Wood’s eleven independently released solo albums and one duo album (Stand and Sway) have gained her a fan base that is loyal and true, and her creative work has earned her the prestigious Kerrville Folk Festival New Folk Award and the 2019 Oregon Book Award Peoples’ Choice Award for her poetry book Ladder to the Light.

Singer, songwriter, entertainer, poet and teacher Tom Kimmel is all of those things and more. For the past 30 years, dozens of Tom’s compositions have been recorded by luminary artists, including Linda Ronstadt, Johnny Cash, Joe Cocker and Randy Travis. Kimmel’s business card facetiously reads Overnight Success… because the truth is far from it. After college he worked as a cook, bus boy, taxi driver, shipping clerk, lab technician, janitor, bartender and window washer on his way to establishing himself as a writer for film (Twins, Runaway Bride, Serendipity), television (Touched By An Angel, Dawson’s Creek, Miami Vice). A soulful, funny and inspiring performer in his own right, Tom tours and teaches widely. He’s released seven solo albums, published a book of poems, and he’s as vibrant and creative as ever in his sixth decade of music making. A self-described “closet poet” until the publication of his collection The Sweetest & the Meanest, Tom has been a featured writer at book festivals and writing retreats, and his poems have been published in a number of poetry and literary journals.

Portland, Oregon based Anna Tivel reaches for a thread of understanding with her music, that moment of recognition, of shared experience. There are thousands of miles on her touring odometer and each town is a tangled web of heartache and small reasons to believe. With four full-length albums out on Portland’s well-loved Fluff & Gravy Records, Tivel continues to touch on a common human thread. Her newest album The Question was recorded mostly live at Hive studio in Eau Claire, WI, engineered by the esteemed Brian Joseph (Bon Iver, Sufjan Stevens) and produced by drummer and multi-instrumentalist Shane Leonard. NPR called it “one of the most ambitious folk records of 2019.” Her previous release, Small Believer, was heralded by NPR as “an album that repeatedly achieves this exquisite balance of the quotidian and the sublime.”

On Sunday, November 1, 2020, stellar mandolin player Sierra Hull will perform with a full band, demonstrating her wide ranging and exceptional musical talent as a writer, singer and performer. In her first 25 years alone, singer/songwriter/multi-instrumentalist Sierra Hull hit more milestones than many musicians accomplish in a lifetime. After making her Grand Ole Opry debut at the age of 10, the Tennessee-bred virtuoso mandolinist played Carnegie Hall at age 12, then landed a deal with Rounder Records just a year later. Now 28 years old, Hull is set to deliver her fourth full-length for Rounder, an elegantly inventive and endlessly captivating album called 25 Trips.

Revealing her profound warmth as a storyteller, 25 Trips finds Hull shedding light on the beauty and chaos and sometimes sorrow of growing up and getting older. To that end, the album’s title nods to a particularly momentous year of her life, including her marriage to fellow bluegrass musician Justin Moses and the release of her widely acclaimed album Weighted Mind—a Béla Fleck- produced effort nominated for Best Folk Album at the 2017 Grammy Awards.

Marking a bold new era in Hull’s artistic evolution, 25 Trips wholly channels the pure and palpable joy she discovered in the album’s creation—and ultimately illuminates certain truths about the indelible connection between risk-taking and reward. “One of the things I most enjoyed about making this record was getting to show the wide variety of music I love,” says Hull. “I don’t really know what category the album falls in, but I also think that matters less and less. What really matters to me is trusting myself to be who I am, and just putting my voice and my heart out there in the most sincere way that I possibly can.”